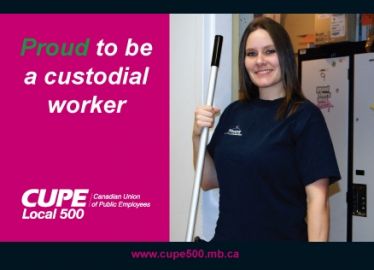 Some city officials want to privatize custodial services in Winnipeg. These are the workers who clean libraries, aquatic and recreation facilities, and city office buildings. They not only keep public facilities clean, they are the eyes and ears that help maintain a safe environment.

Contracting out often retults in "cutting corners" for the sake of private profit.  This can put public health at risk

The citizens of Winnipeg deserve to have a skilled, experienced workforce dedicated to providing clean and safe facilities – not a private company who hires low paid inexperienced workers in order to make a profit. Quality public services are the key to strengthening neighbourhoods and communities.

Contact your city councillor and say "no" to privatization of custodial services!

Since our last update on April 11, 2013 we can now confirm that the Custodial report is not on the agenda for the April 24th City Council meeting. We believe that this item will not be dealt with until the May 29th meeting of Council.

As we told you in our previous communication, it is business as usual for custodial services until a final decision is made. We also reported to you that the Local will continue its public relations portion of our campaign including TV, radio and print ads. Since the airing of our second TV ad on April 11th, we have placed print ads in various publications regarding these issues. You can click on the following link to view the ad.

We will continue to update the membership as more information becomes available.

Today, the City of Winnipeg released two statements regarding the Alternate Service Delivery process with respect to city-run golf courses and custodial services.

In these statements, the City maintains that the privatization and contracting out of these municipal assets and services will result n savings for the taxpayer.

CUPE Local 500 asserts that this is completely false.  The City’s statements also allege that CUPE Local 500 did not participate in discussions related to these proposals.

This again, is false and misleading.

Local 500 has consistently presented to City Council, the highest decision making body in the city. Presenting to City Council is the most transparent way to assert our opinions. We will not be drawn into back-door meetings with select councillors and bureaucrats – we present our views openly and publicly.

Winnipeggers deserve an open and transparent city hall, and are quite frankly sick of closed door meetings. Trust has been lost for our City Hall, and it’s important to CUPE to present publicly at city council, and we will continue to do so.

An administrative report on the above two initiatives will be considered by the City’s Alternate Service Delivery Committee on Monday, February 25, 3013.

Please watch for further updates on these important issues.

You can click here to read a background document on CUPE’s position on the ASD/Modified Managed Competition Process.

Local 500 will begin airing a new radio ad around the issue of contracting out of custodial services.  The ad will begin airing on CJOB, Power 97 and 99.1 Fresh FM on Monday, January 21, 2013.  You can click here to listen to the ad.

“This process of modified managed competition is simply a wolf in sheep’s clothing and will ultimately lead to privatization,” said Local 500 Mike President.

Currently, a combination of City staff and contractors are used to provide custodial services within city offices and pools.  According to the ASD report, the Planning, Property and Development Department is recommending that the City contract out all building cleaning to the private sector through a staged implementation process based on the ability to redeploy affected staff.

“This is just one more area where the city wants to privatize our work, and we have to take a strong stand,” said Davidson. “We know we are providing the Public with quality services - and we need to make sure the Public knows it.”

On October 22, the City's Alternate Service Delivery (ASD) Committee adopted the recommendation of the Winnipeg Public Service to initiate proceedings through a process known as "modified managed competition" for the contracting out of custodial services.

In July of this year, Winnipeg City Council voted in favour of using this same process to decide the future operation of its golf courses.  Under this type of model, the city would like the union to bid as though we were a private company, to manage and run the operations of the golf courses. The Local has made it clear in our presentations to City Council, that unions do not bid on the work of their members.

"For one thing, it's not legal for us to be both the employer and the union," said Local 500 President Mike Davidson.  "If our Local becomes a successful bidder, we effectively become the employer and that conflicts with our role as the bargaining agent for the employees," he said.

Throughout the decades, CUPE has worked with the City administration and council on a number of initiatives to help improve services.

"We have never been opposed to working with management for service delivery improvements," said Davidson. "But this modified bidding process, is just another form of privatization," he said.

The contracting out of janitorial functions was listed as one of many recommendations contained in the City's Economic Opportunity Commission (EOC) report authored by Councillor Fielding back in 2007.

"Clearly, we are still seeing the ramifications of the EOC  report," said Davidson. "It's both frustrating and concerning, that city council continues to risk the quality of services for its citizens through these constant threats of privatization."

About 53 members of Local 500 provide custodial services for both office buildings and aquatic facilities.