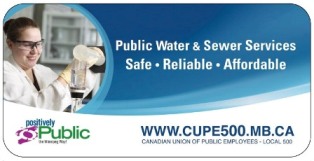 On May 19, 2010, City Council voted 9 - 4 in favour of the City's Executive Policy Committee's (EPC) recommendation to begin the design and construction of the South and North End sewage treatment plant upgrades and expansion of the biosolids handling facility.

The motion called for the City's Chief Administrative Officer to enter into a multi-year contract with Veolia that conforms to the terms set out in the Public Services report dated May 6, 2010.

The report, which claims “the 30 year contract is expected to save taxpayers from 10 to 20% of the entire sewage treatment program costs,” doesn’t say where those savings will come from (besides vague references to “improved design,” “innovation” and “bulk purchasing”;) or offer any numbers to back this claim up. The report also promises that Veolia will share with the city in the financial risks associated with the project, but doesn’t say what Veolia will get in return for assuming this risk or how much it will cost Winnipeg.

In his presentation to EPC, Local 500 President Mike Davidson opposed the deal calling for the City to disclose the full implication of the contract to the taxpayers.

"We call for full public disclosure of the entire contract, so the public can evaluate the costs of the arrangement, its purported benefits, and the risks of signing a 30-year deal with a private corporation, before going any further," said Davidson.

Davidson went on to say that there were inherent flaws in the new business model. "While we commend the City for rejecting the initial P3 model, we have concerns about a private corporation playing any role beyond the design/build stage - whether it be management or elsewhere in our City's sewage services.

Local 500 has been campaigning steadily to keep the City's water and sewage treatment systems publicly owned, managed and operated since the City first proposed the creation of a municipal corporate utility model in November, 2008.

"CUPE Local 500's priority is protecting vital public services and the public interest and we will continue to scrutinize this project with those goals," said Davidson.

The City of Winnipeg is creating a City owned Municipal Corporate Utility as a new arm’s length business model to operate water and waste services.

The union is concerned that handing control over to an independent corporation will significantly reduce the city's authority and accountability for this vital service. We are also concerned that this new Corporate Utility Model will ultimately lead to privatization of the City's wastewater services.

The alternative service model being proposed comes from a report by consultants Deloitte & Touche whose recommendations include the involvement of a private agency better known as a Public Private Partnership (P3), to design, build, finance and operate the wastewater component of the utility. P3s are a form of privatization where private corporations take over the operation and financing of public infrastructure and services. CUPE Local 500 is adamantly opposed to any such move to privatize public services.

Local 500 has been making presentations to the City's Executive Policy Committee and City Council in opposition of any recommendations that jeopardize the public delivery of this important city service. It is anticipated that the recommendation to proceed with the new business model will be on the agenda of the July, 2009 City Council meeting.

A coalition of community, student, faith, environmental and union groups are campaigning to protect public water. These groups are educating the public about the dangers of privatizing water and lobbying politicians to keep water a public resource.

Defending public services is a major issue and priority for our Local. As a CUPE Local 500 member, it is important now more than ever, for you to become involved in the Positively Public Campaign to support public services and defeat privatization.

It’s time to take action and speak out! Give a little of your time and help deliver a message to Winnipeggers that our public services are important to the quality of life we all enjoy.

Bookmark this page for regular updates on action planned to defend this most natural resource. Sign-up for email alerts to stay informed about action taking place to keep water public

THE SUCCESS OF THIS CAMPAIGN DEPENDS ON YOUR SUPPORT.

CUPE Local 500 submission to EPC and City Council - Changes to delivery of water/waste services - Solutions looking for a problem - July, 2009