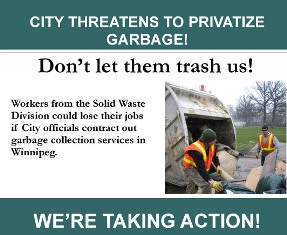 In July 2005, Winnipeg City Council approved the contracting out of all collection of solid waste in Winnipeg. Since 1999, city employees collected waste in the southern half of the city and Waste Management Inc collected in the north.

In May, 2005 Local 500 launched a campaign to influence City Councillors on the issue. The Campaign tried to build support for keeping the work in public hands among CUPE members and the general public. Information on this issue was shared, newspaper articles and ads were published, a rally was held and numerous discussions took place with a range of people involved in the city’s solid waste industry.

Please click on some of the information and resources used in the fight-back Campaign.