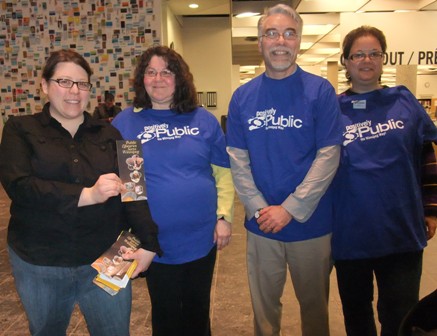 CUPE 500 members take to the streets against cuts to libraries

Members of Local 500 hit the streets near the Millenium library on Thursday, January 14 to give out information to the public about cuts to libary services.
"Libraries are an important public service that deserve adequate funding" was the message delivered to the almost 800 passers-by.

"Libraries play a vital role in maintaining the quality and life in our communities," said Mike Davidson, President of CUPE Local 500. "If you cut funding to libraries, you cut the livelihood of the citizens of Winnipeg.

During these hard times, people are looking to libraries even more to provide learning opportunities for families who can’t afford books or a home computer. Cutting public library budgets have resulted in libraries being thinly staffed and under-resourced.

Please join the campaign to stop the cuts to library services. Clink on the link below to contact the mayor and your city council. It's time to speak out and tell them you support more funding for your library!

City proposes changes to cataloguing section of the Library services

On August 18, 2009, the Local was advised that changes were planned for the cataloguing section of the Library service.

On November 10, 2009 the Local made a presentation to the Executive Policy Committee of Council in opposition of the proposed changes. In his presentation, CUPE Local 500 President pointed out that the City did not provide the type of notice or documentation contemplated by the Collective Agreement.

"In CUPE’s view the business plan document is inefficient and lacks key information and explanation to describe the potential effectiveness of the proposed changes. We believe that a strong business plan process should be completed and analyzed before any decisions are made on what should be done with the cataloguing component, and the allocation of staff."

The Local is filing a grievance regarding this process.

Defending public services is a major issue and priority for our Local. As a CUPE Local 500 member, it is important now more than ever, for you to become involved in the Positively Public Campaign to support public services and defeat privatization.

It’s time to take action and speak out! Give a little of your time and help deliver a message to Winnipeggers that our public services are important to the quality of life we all enjoy.

Bookmark this page for updates on action planned to defend our public libraries. Sign-up for email alerts to stay informed about action taking place to keep libraries public

THE SUCCESS OF THIS CAMPAIGN DEPENDS ON YOUR SUPPORT.